In memory of the Bank of Saint-George 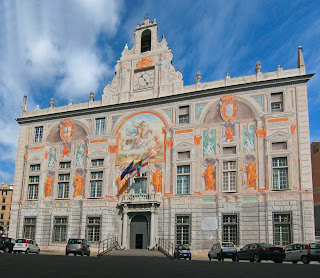 There have been a lot of talks about banks lately in France, both because of the Cypriot debacle and because the minister in charge of the French IRS has been caught red-handed hiding a substantial amount of money in some Swiss bank. This has given renewed impetus to the fight against tax heavens and bank secrecy – which is indeed a good thing – and a renewed credibility to the many narratives, which present banks as some kind of vampires’ conspiracy bent on sucking all the world’s economies dry.

Those narratives are old and, as often happens, they were promoted by the far right – and notably the Larouchies – before being adopted by a part of the left, and, of course, they are totally wrong.

While banks have some leverage and can influence governments int adopting measures favorable to them, but so does the entertainment industry, or the Unions. More important, this leverage, like any power center’s in our societies, is highly dependent upon the continuity of the system. Should it collapse, or change in a sufficiently dramatic way, banks, and more generally, the finance industry, would lose their power nearly overnight, as the (not so) sad story of the Bank of Saint-George shows.

The Casa delle compere e dei banchi di San Giorgio was founded in 1407 by a number of Genoese oligarchs, among whom the Grimaldi and Serra families (yes, those Grimaldis). The Republic of Genoa was a merchant republic, under the control of a handful of noble and trading families. It had been a major power in the Western Mediterranean during the crusade era but had lost most of its positions to Venice, then to the nascent Ottoman Empire, and was progressively becoming a French and Milanese protectorate.

As the Republic became feebler and feebler, the Bank acquired greater and greater power For a time several Genoese provinces – notably Corsica and Southern Crimea – were even ruled directly by the Bank – the strapped for cash republican government had simply pawned them. The bank’s influence was such that Niccolo Machiavel could write :

On the other hand, as the city had at first conceded the customs, she next began to assign towns, castles, or territories, as security for moneys received; and this practice has proceeded to such a length, from the necessities of the state, and the accommodation by the San Giorgio, that the latter now has under its administration most of the towns and cities in the Genoese dominion. These the Bank governs and protects, and every year sends its deputies, appointed by vote, without any interference on the part of the republic. Hence the affections of the citizens are transferred from the government to the San Giorgio, on account of the tyranny of the former, and the excellent regulations adopted by the latter. Hence also originate the frequent changes of the republic, which is sometimes under a citizen, and at other times governed by a stranger; for the magistracy, and not the San Giorgio, changes the government. So when the Fregosi and the Adorni were in opposition, as the government of the republic was the prize for which they strove, the greater part of the citizens withdrew and left it to the victor. The only interference of the Bank of St. Giorgio is when one party has obtained a superiority over the other, to bind the victor to the observance of its laws, which up to this time have not been changed; for as it possesses arms, money, and influence, they could not be altered without incurring the imminent risk of a dangerous rebellion. This establishment presents an instance of what in all the republics, either described or imagined by philosophers, has never been thought of; exhibiting within the same community, and among the same citizens, liberty and tyranny, integrity and corruption, justice and injustice; for this establishment preserves in the city many ancient and venerable customs; and should it happen (as in time it easily may) that the San Giorgio should have possession of the whole city, the republic will become more distinguished than that of Venice.

In 1528 the Hapsburg Emperor Charles V allied with Genoese Admiral Andrea Doria and ousted the French, restoring the independence of the Republic under Spanish protection. The Bank began then to finance the Spanish monarchy, acquiring considerable influence in the process. Spain, ruled by the Hapsburg, had become very wealthy from the pillaging of the Inca and Aztec Empire. American gold and silver had, however, to be transported across the Atlantic to be of any use – a lengthy and dangerous process, which pirates and privateers soon made yet more lengthy and dangerous.

The Genoese bankers provided therefore the Habsburgs with fluid credit and a dependably regular income. In return, they took the lion’s share of American silver and accumulated, quite predictably, an indecent amount of money in the process.

The Bank used this money to invest in colonial ventures, competing with Dutch East India Company and the English East India Company, and was a major player in European economy up to the end of the XVIIIth century despite the decline of Spain... then evaporated overnight.

Genoa happened indeed to lie uncomfortably close to revolutionary France. It was invaded in 1797 by a French general called Napoleon Bonaparte. Bonaparte turned Genoa into a French client, the Ligurian Republic. In 1805, the same Bonaparte, who had become an emperor in the meantime, annexed the area.

Bonaparte had also created what would become the Bank of France in Paris, and given it a monopoly on money printing. The idea was to create a stable currency and a reliable source of cash for France’s foreign ventures. Bonaparte happened to be a major shareholder and, being practically-minded, he quickly understood that concurrence was bad for business – his own anyway. The Bank of Saint-George was therefore told, politely but firmly, to please cease operations as soon as possible, which it did – French emperors tend to be very convincing, especially when their words are backed by an indecent number of infantry divisions. 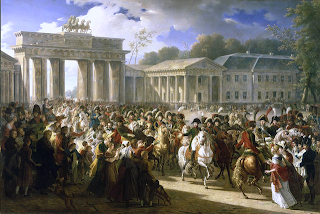 It was not, however, French military power that enabled Napoleon the First to annex Genoa and dissolve the Bank of Saint-George, but the fact he was not a traditional monarch and was not bound by the traditional rules of statesmanship. The problem, indeed, with owing one’s throne to tradition, was that you had to obey traditional laws, lest you undermine your own legitimacy. The French kings could boast as much as they wanted about being the State, their actual power was fairly limited. They couldn’t, for instance, raise new taxes without the assent of the États Géneraux.

Napoleon, on the other hand, was the heir of a violent revolution. He based his power on military force, but also upon a variant of the enlightenment which emphasized equality, rationality and national sovereignty – albeit not freedom of the press and electoral democracy. It was not founded on tradition and therefore was not bound by it. Of course, that also meant he was not protected by it either and could be only as strong as his last victory.

Our situation is, mutatis mutandis, similar to the ancien régime kings. Even though we are theoretically in position to severely restrict or control the activities of the banking industry, or of any other sector of the economy, we are, in fact prevented to do so by a corset of self-imposed rules. 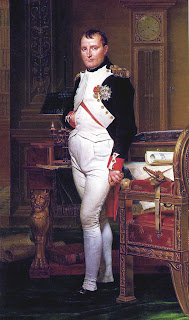 This is partly due to the diffuse nature of power in developed societies. Power centers are so numerous and so balanced that it is becoming increasingly difficult to effect meaningful change. The resistance Gay Marriage is meeting today in France, while it is a painless reform, is a case in point.

This is also partly due to the effects of peak energy, both because governments increasingly lack the means to implement reforms and because, since the energy surplus available to actually do something in our societies is dwindling, those who want to become rich shy away from industry and flock into finance and banking, aka summoning of imaginary wealth.

Add to this the rise, after the eighties, of laissez-faire ideologies exemplified by Reagan or Thatcher, and it is easy to understand why the finance industry has become so powerful. By the way, and ironically, the come back of those once discredited laissez-faire ideologies originated from the left moving away from social issues such as wages or working conditions during the seventies and adopting a generally more individualistic and anti-authoritarian stance – what we call in France the 68 thought.

This power is, however, as brittle as the Bank of Saint-George’s, perhaps even more. Bankers and traders have no army and command no loyalty. They can’t even hire mercenaries like the Bank of Saint-George did. The cost would bankrupt them and they would probably be quickly defeated. Their power lies in their ability to use and manipulate the corset of rules our society has given itself and to influence politicians who belong more or less to the same world.

Should society decides to play by other rules, or should political elites distance themselves from the finance, their influence will just disappear. You does not necessarily need a revolution for that, by the way. Franklin Delanoe Roosevelt and French President Charles de Gaulle both made sweeping changes in their countries’ policies without using violent or unconstitutional means – De Gaulle came into power through a quasi coup, granted, but he did not use violence and the regime he installed was, and is still democratic.

What matters is not the supposed power of such or such economic power center but our collective ability to accept the idea that the ultimate sovereignty belongs to the political and that private and factional interests prevail only because we allow them to do so.

That does not mean, of course, that you can wish away the political and sociological consequences of peak energy or, for that matter, that it is a good idea to oppose bare-handedly a government both able and willing to use force against you – those who have tried have gotten into real troubles.

What that means is that the finance industry is not the nearly invincible behemoth described by far left (or far right) mythology. It has not the means to coerce the society and deprived from the support of those who can, it will prove as brittle and evanescent as the theoretically all-powerful Bank of Saint-George.

If you want to curb its power, I suggest you go to your nearest congressman and tell him about the Bank of Saint-George... and of the man on the white horse who decreed it out of existence... and of the way he got into power... and of what happened to those who got in his way.

He might listen.
Posted by Damien Perrotin at 1:10 AM