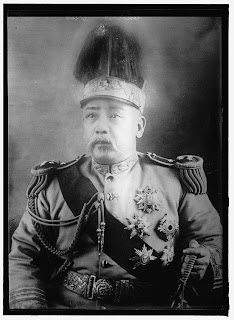 Politics can be involuntarily funny. The 2000 presidential election certainly was, seen from this side of the Atlantic, and while the Dominique Strauss Kahn debacle was traumatic, the circumstances of our former president to be’s fall make the whole episode somewhat amusing, at least in retrospect. We just have had another of those Florida 2000 moments, but one which is very indicative of the situation of our political system and of why we shouldn't count on it to give a meaningful answer to our predicament.

After its defeat in may, Nicolas Sarkozy has retired from politics, but his party, the UMP, remained and, as could be expected his lieutenants fought over the succession. One, Jean-Louis Borloo, created a brand new party with the ambition to control the center of the French political spectrum. It is not an unprecedented strategy and it may succeed, or not. Two others, François Fillon and Jean-Louis Copé aimed for the party leadership. Those of you who can count will, I think, agree, that was one leader too many.

Once, the situation would have been resolved behind closed doors, with party officials scheming and backstabbing until a choice has been made – the winner would probably have been Copé, by the way, as he had the full control of the apparatus.

This way of proceeding has, however, somehow fallen out of fashion and those days we prefer to put such decisions into the hands of activists as it feels more democratic and make the elected leader's legitimacy less questionable. Unfortunately this method can also backfire spectacularly.

It certainly did in this case. 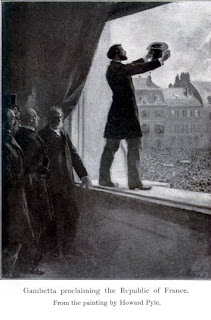 Officially Copé won the election with a lead of 98 voices, that is until one noticed that somebody had forgotten three overseas departments. Of course, and very conveniently, taking this couple of islands into account reversed the result, giving François Fillon a lead of some 126 voices. Predictably, the whole episode degenerated into opera-bouffe baboonery with both candidates accusing the other of having rigged the election, which they probably both did by the way. Copé, who had the loyalty of the party bureaucracy, clang to his presidency like a barnacle to its rock. Fillon send a bailiff to put the ballots under seals so they be not tampered with, then threatened to sue his own party. Finally he triggered a schism among UMP members of parliament, some 72 of which created a separate group in the French National Assembly : the rump (no, I didn't make that up, that's how it is called). Last I checked they have agreed to organize a revote in September.

This is not the first time such a misadventure happens to a French party. In 2008, the election of the first secretary of the Socialist Party had been a very close thing and both and Ségolène Royal (the loser) accused, for a short while, Martine Aubry (the winner) of having rigged the election. It has never before gone so far, however.

The irony is that there is no real ideological difference between François Fillon and Jean-François Copé. They are both pro-business and law-and-order conservatives, both dislike Muslims and both oppose any alliance with the far right National Front. Moreover, the schism has had no repercussion at the local level.

In fact, their ideological similarity is the very reason why thins got so heated.

Homo Sapiens is a savanna hunter ape with a dominance-based society, probably close, originally, to the baboons' – the primate genus occupying the ecological niche closest to our ancestors'. Baboon societies vary greatly and there is no need to think our ancestors' was as brutally patriarchal as the hamadryas'. They are, however, typically built around a core of competing dominant males which can cooperate to defend the band against predators but are otherwise rival. 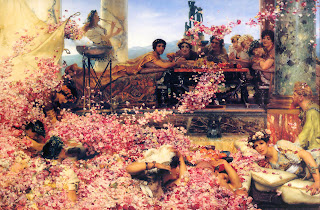 Early humans were pack hunters, however, and successful pack hunting requires cooperation. So we evolved a number of social devices to limit the power of dominants and make sure even those at the bottom of the ladder get some part of the pie. Even a cursory look at human history will show that it is still pretty much a work in progress.

Ideology is one of those devices. Of course, when allowed free reins, it can generate social cancers such as Nazism, Bolshevism or our present obsession with growth. Within the framework of a sane democratic society, however, the existence of competing ideologies, what Max Weber called the polytheism of values, is a guarantee not only that the opinion of the common people will be heeded, since his support is needed for a cause to triumph, but also that the behavior of the dominants will be kept under control. 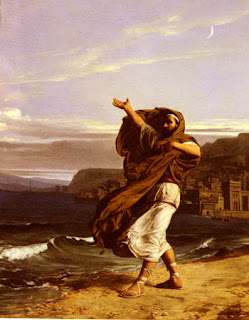 Ideology changes the game because even though the personal qualities of the leader remain fundamental, he no longer owes his position to them, but to being the spokesperson of such or such cause, and once in power, he is definitely supposed to keep his word. Lukewarm as he might be, our president would quickly lose power if he suddenly morphed into a clone of Margaret Thatcher and when Chinese republican leader Yuan Shikai tried to restore the monarchy in 1915 he was quickly ousted.

Political ideology, or to put it more specifically the tying of legitimacy to the professing of a particular ideology, is the daughter of revealed religions, most notably Islam and Christianity. The main particularity of those religions is that they tie salvation not to what you do but to what you believe. This explains the ferocity of doctrinal quarrels in early Christianity. Being mistaken about the nature of Christ could literally land you into the lake of fire. Precisely defining the tenets of orthodox faith was therefore of foremost importance.

Another consequence was that since legitimacy ultimately came from God, it could be withdrawn should you believe something He or His terrestrial representatives disapproved of. The lands of an heretic or pagan king could be seized with impunity. This is what happened to the Slavic princes of what is today Eastern Germany, but also to the Irish kings after the bull Laudabiliter allowed England to invade the country to “root out the corruption within the local church”.

The centrality of doctrine in the Christian and Islamic religions made nearly sure that at some point that disputes, which in other contexts would have been safely contained within the walls of some university, would morph into heresies then civil wars. In Islam this happened as soon as 657 with the formation of the radical (and quite militant) Kharijite sect. The medieval Church was very good at stamping down opposition but it was bound to fail at some point. This nearly happened during the Albigensian Crusade, when the Church was forced to create an institution dedicated to the destruction of heresies : the infamous inquisition. 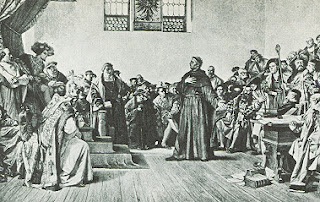 This was not enough, however, to prevent the temporary victory of the Hussites during the early fifteenth century and, most importantly the spread of the reformation after 1514 which started a cycle of wars and civil strifes which lasted until the beginning of the eighteenth century. One of the consequences was the displacement of religion as the center of political life and its progressive replacement by secular ideologies, the foundations of which were laid by Hobbes, Locke and Voltaire but also, in a totally different way, Burke and Herder.

The rise of secular ideologies was helped by another factor : industrial revolution. The same way Leonardo da Vinci's flying machines were unlikely to leave the drawing board without fossil fuels to power them, the perfect societies designed by Plato, Tomasso Campanella or Thomas More were bound to remain fantasies without the huge surplus the industrial revolution and fossil fuels provided. 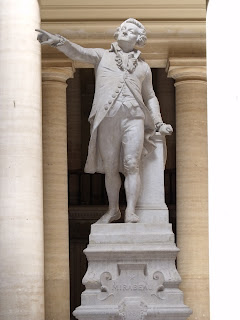 The huge surplus engendered by industrialization enabled us to try various social experiments, at least one of which, modern democracy, was a real success. More important, they enabled us to choose between different kind of policies, something which would have been impossible in a resource-poor world. These choices, of course, would have been unthinkable without the existence of competing political ideologies. This is, by the way, one of the reasons why non-european civilizations failed to industrialize.

Of course ideologies could, and did, run amok, but within the framework of democracy, they provided the intellectual basis without which no real choice was possible. The problem we face now is that the surplus, that enabled us to enact those choices are dwindling and will disappear in the near future.

The complexity of our society is such, that a very large part of our energy production is used up to maintain our infrastructures. This means that as we reach peak energy and begin the long descent, the resources available to actually get things done will diminish with every passing year, eroding the capacity of governments to do anything meaningful. Of course, this impotence is also due to the growth-oriented nature of our leading ideologies, but this is unfortunately unlikely to change before the first disasters shatter our world-view.

Without the resources to enact choices, political ideologies become hollow words, useful only at election time to mobilize what has essentially become a captive audience. The political game reverts then to the pure unadulterated baboonery it was before the emergence of ideologies. The goal of the game is no longer to get in power to enact such or such policy but to get in power to... well, enjoy it, very much like your average Roman Emperor or Chinese warlord.

It is also true, by the way, of those groups which have no realistic chance to get in power. Being a minor ally of the ruling party can bring real advantages and even outside of the circles of power, there is prestige and even money to be had in small political sects, such as the trotskyist groups or the Larouchist parties, or in anti-system movements such as the French National Front.

This is not so much hypocrisy as the result of a situation where real political change has become nearly impossible and where faction loyalty and cynicism are essential survival skill. While idealism is still present, even among veterans, it is progressively buried under "practicalities". 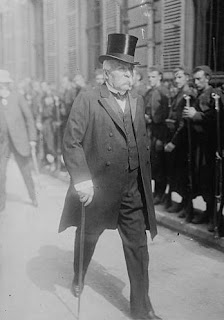 The most likely result will be a kind of quasi-oligarchy in which elections are decided by the capacity of both major parties to mobilize captive audiences and lobbies, and control smaller allies. Bitter personal feuds will replace in-party ideological quarrels and both the left and the right will focus on peripheral societal issues to mask the fact their actual policies are nearly indistinguishable. Frustration and apathy will rise and with them the probability some authoritarian boss takes over.

Those who are familiar with the French political life will recognize today's climate.

The only way out of this predicament -short of handing power to an uniformed thug, that is – is to accept that without a constant inflow of high-grade energy, growth-oriented ideologies are hollow and remove growth and material affluence from the equation. If we want democracy to continue, we must base our political choices upon something else than prosperity. It is easier said than done but if you look at the works of the founders of our democracies, whether they be on Locke's side or on Burke's, you'll find that they did not care so much about wealth. Values such as equality, liberty or tradition were far more important in their view.

Maybe we should return to them.
Posted by Damien Perrotin at 6:35 AM